skip to main | skip to sidebar

I saw this on another blog and thought I would have a go! Basically, you tell the story of how you met your boyfriend, husband best friend whatever! 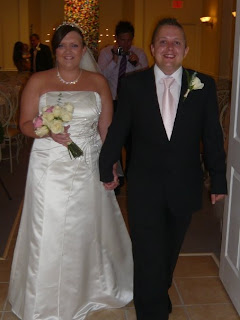 We met in November 2002, I was 16 and I was out with my friends in the club we went to every thursday and saturday night. And I spotted a guy who we had seen a few weeks earlier who had been completely wasted and had poured a drink down my friends back and then thrown the glass on my toe. I'd also seen him during the week when I got off the bus from work, so I went over to give him a piece of my mind, I don't really know why! Anyway, to get away from my ear bashing he introduced me to his friend, and we spent the rest of the night together. We swapped numbers and he went home on his own, and I went back to my friends. When I got home I phoned him, yes I was keen, I was 16 I didn't knowany better but I knew I really liked him. He was 21 and a lot of the "boys" I'd been involved with up until then had been really immature and I hated it so I knew I needed somebody older than me - I've always been old headed. Anyway, we talked for a while and then the next morning I phoned him and said "So are we going out today" And we went to the cinema that night. That was a sunday, I saw him again that week and then on the thursday I went out for my friends birthday and he came to meet us and that was when we decided to "go out properly" haha.

I think we both fell in love very quickly, I remember Col telling me so within less than a month. We got engaged in July 2003, which I know isn't long especially when I was only 17 and I was terrified of telling my parents but I just knew he was the man I would spend the rest of my life with. We bought our house in 2005, and it was a bit rocky at first. We argued a lot, its very hard to get used to living together. We had spent a lot of time together beforehand, he used to stay at my parents from thursday til monday morning but nothing prepares you for seeing each other 7 days a week for so much time and them being there when you walk through the door from work when you might be a bit stressed. I even moved back to my parents at the end of 2006, which did us the world of good as it made us both realise how much we loved each other and how we didn't like to be apart. In May 2007, we found out we were expecting a baby. Which wasn't a surprise, we'd had a very drunken conversation in the march and said "Ooh lets have a baby" this was in a kebab shop waiting for our takeaway!! Alice was born in December 2007 which was amazing. We both love being parents and she is just the light of our lives and makes us so proud. I think we both have moments where we look at her, then look at each other and we're like "We made her" but we don't say it, you can just tell we're thinking it.

We got married in September 2008 in Florida which was fun! But we also missed some of Col's family there, we kept expecting them to show up on the holiday to surprise us. It was our fault as we only decided 6 weeks before we were due to go on holiday, that we'd get married there. We did have a big party when we got home, and I got to wear my dress again.

Col always tells me it's fate that we met, as him and his friend went to a different club that night originally but they wouldn't let them in because of a silly joke they made. I'm so glad, I can't imagine myself with anybody else and I can't wait to grow old with him and have more babies and grandchildren :) I hope I didn't bore you all anyway! I thought I'd share a couple more pictures with you - prepare yourself for 16 year old me with blonde hair!!

The night we decided to "go out properly" 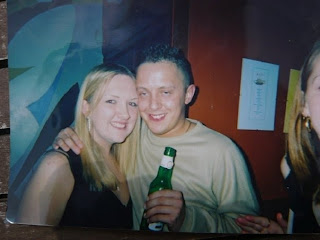 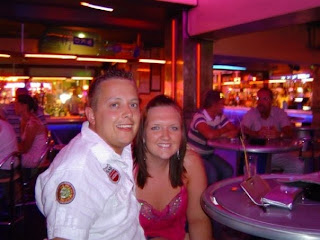 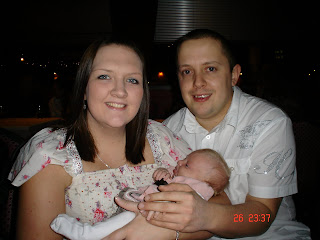 I tag you all, please let me know when you've done it as I love hearing how people met! x
Posted by Jen at 23:04

Jen
Hi! I'm Jen, I'm 24 and I live in Manchester. I love all things cosmetic, and blogs! If you would like to contact me, please email me at xjenniex20003@hotmail.com